Keith Law, longtime Professor of Philosophy at Merced College, warns educators in an open letter about the consequences of scientific illiteracy among today’s college students.

I am writing to share a concern regarding students’ lack of basic science education in general, and more particularly their lack of understanding of the pending global warming disaster that will occur in their lifetime. I have had a brief discussion on my campus (Merced College) with the dean of the science disciplines who is in agreement with the scientific claims that follow. If any of the claims regarding the science of global warming in what follows do not appear sound, I welcome clarification.

The United States Global Change Research Program was established over 20 years ago under the direction of thirteen federal agencies, including the Departments of Defense, State, Agriculture, Commerce, Interior, and Energy, as well as NASA and the Environmental Protection Agency.

The program synthesizes key evidence regarding global warming and presents periodic reports to the U.S. Congress and the President. In the summary of their 2017 report it states, “The impacts of climate change are already being felt in communities across the country.” These impacts are “…expected to continue to damage infrastructure, ecosystems, and social systems…” Finally, “The continued warming that is projected to occur without substantial and sustained reductions in global greenhouse gas emissions is expected to cause substantial net damage to the U.S. economy throughout this century.”

Like many of you, for some time I was under the impression that we had a few generations to get greenhouse gas emissions under control. However, according to the International Panel on Climate Change (IPCC), at the current rate of greenhouse gas emissions we will likely experience a 1.5 °C (2.7 F) global temperature increase by 2040, only 20 years from now. The current scientific consensus is that we need to halt global warming around 1.5 °C to avoid the worst case scenarios, which are projected to increase dramatically when we hit 2 °C and above.

The IPCC’s “Special Report on Global Warming of 1.5 °C” includes over 6,000 scientific references. Its key finding is that meeting a 1.5 °C target is possible but would require “deep emissions reductions” and “rapid, far-reaching and unprecedented changes in all aspects of society.” 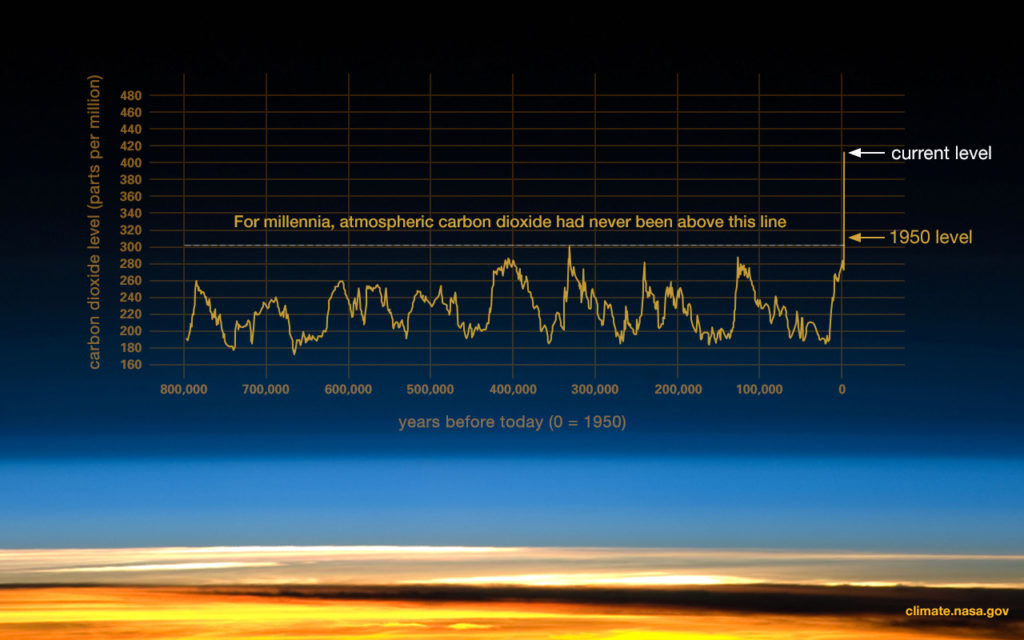 Given the national and international scientific consensus shared above, it is shocking that the vast majority of the students in our classrooms have little or no understanding of what is looming in the near future. I have presented the diagnosis shared above to students in all five of my courses this semester, and nearly all of them were hearing it for the first time. Of course they have heard of global warming (climate change), but very few understood that it was happening now, and will likely become disastrously worse while they are in the prime of their lives. Consider that a 20 year old student today will be 40 when we are projected to hit the 1.5 °C limit.

Those of you who have young children, or like me grandchildren, can simply add 20 years to their current age and feel the urgency of this diagnosis. All young people today will live their entire lives under the dark cloud and destructive forces of global warming. These same young people are the ones who will have to deal directly with the crisis. For those of us working in higher education, to allow students to remain ignorant of the facts is, in my opinion, not only unwise but also unethical. We should be working together to find ways for our students to attain as a part of their GE coursework a better understanding of science and the particular scientific findings regarding global warming.

It is all too human to go into a state of denial when receiving a dire diagnosis like that presented here. From a state of denial springs rationalizations (“there have been many ice ages and warming trends in the 4 billion years of earth’s existence”), and wishful thinking (“technologies will come along to save the day”), but young people don’t have the luxury to entertain these symptoms.  The evidence is in and it is clear:

It would likely be better if we were entering another ice-age that could be thwarted by blowing more greenhouse gases into the atmosphere.  No doubt the fossil fuel industry and the politicians they back would be working overtime to help out with that scenario. Sadly, the opposite is true, so we all need to say goodbye to fossil fuel as a main source of energy.

Those of us working in higher education have a unique opportunity and responsibility to lead in the efforts to make the changes necessary. I have faith that we will do the right thing for our youth.