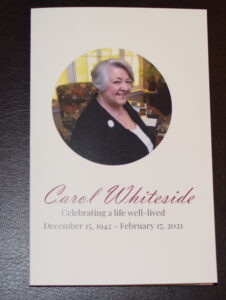 Sunday, October 17, at Modesto’s Graceada Park during a Celebration of Life for Carol Whiteside, Modesto Mayor Sue Zwahlen and Stanislaus County Supervisor Mani Grewal brought proclamations citing Whiteside’s impact and lasting contributions to the region, especially with regard to her terms as Mayor of Modesto and Director of the Great Valley Center.

A moderate Republican before the species went extinct, Whiteside was elected Mayor of Modesto in 1987, after a term on the Modesto City Council. She went on to serve in Governor Pete Wilson’s administration for six years, from 1991-97.

A strong advocate for smart growth and farmland preservation, Whiteside may have achieved her greatest impact as the founder and driving force of the Great Valley Center, a think tank that helped shape regional planning and growth throughout the entire Valley. Whiteside led the Center for over thirteen years after leaving the Wilson administration.

It would have been enough that Carol Whiteside was one of Modesto’s finest mayors during a time that now seems like an idyllic interlude between the turmoil of the Civil Rights Era and the tempest of Trump. Her service as mayor, however, was only a milestone along a lifetime of dedication to the Valley and its people.

Renowned as a gourmet chef, Whiteside’s dinners at her home across the street from the park where she was honored last Sunday were almost as noteworthy for the diverse gatherings of people as for the exquisite cuisine.

“She was a master at bringing people together,” said Grayson’s John Mataka. “She didn’t care whether you were a Democrat or Republican. She helped a lot of people, including my children.”

Mataka’s children became part of Whiteside’s quest to develop leadership roles for the Valley’s young people, especially ethnic minorities. She believed local participation was the key to smart regional growth and political influence in the state’s social and economic futures. To that end, she promoted programs that helped develop local leaders throughout the Valley.

Like a great many successful people in any realm, Whiteside’s passion was for getting things done. She realized consensus should be a precondition to accomplishment and worked hard to achieve both. Her unflinching optimism may have been her greatest gift. It was rooted in her belief that everyone has something to offer and should be part of a dialogue that leads to action.

Today’s polarized politics cast a dark pall over the quest for bipartisan progress that drove Carol Whiteside to a lifetime of positive achievement and influence, but coming generations of leaders she mentored will carry her legacy forward.

Whiteside’s genius for compromise may be in partial eclipse for now, but the sun that warmed her optimism still animates the vision of those she cultivated as friends and partners in her venture towards making the Valley a better place for everyone. With typical attention to detail, she ensured she would not be the last of her kind.