“Maybe we should conclude that JIT supply chains, when involved on a global basis and with respect to certain types of businesses and service providers, are not the ideal model for medical preparedness.”

As someone who’s been working for and around physicians since age 13 — not just through my high school years while working for a local doctor in Newman, but during my years at UCSF School of Dentistry — and later, while managing my husband’s private practice for 30 years — I’ve observed a variety of inexplicable physician behaviors over seven plus decades, but perhaps the most egregious happened just recently, during this Covid pandemic no less

My spouse is a practicing physician at a local foundation-owned clinic, which is affiliated with one of the local hospitals in Modesto.

For several weeks, he has been requesting PPE (Personal Protective Equipment) for himself, his colleagues, and their staff members as their specialty often requires them to be within inches of a patient in order to maintain the standard of care treatment the situation requires, much of which occurs on the face, specifically noses, ears, cheeks and lips.

His request was for some N95 masks, which was a simple, early request, as they are the masks recommended by the Center for Disease Control and National Institutes of Health, who also agree with the various other governmental and university scientists, epidemiologists, virologists and physicians who are best qualified to recommend optimal equipment and practices during the pandemic. (Note: As of April, a reported 9,200 healthcare workers had contracted COVID-19, prompting Senators Baldwin, Murphy and Schumer to introduce The Medical Supply Transparency and Delivery Act.)

For weeks, no answers were forthcoming in response to my spouse’s emails. For weeks his department waited, only to receive a few simple, non-sealing face masks that appeared at a rate that at least allowed for more frequent replacement by the wearer than before.

Yes, they tried telemedicine, but that doesn’t work for every specialty, my husband’s in particular, so the clinic began booking live patients again, but still no N95 masks and nary a reply to my husband’s requests. So as his schedule became fuller and fuller, he wrote one more time and finally: A response!

The letter began by thanking my husband for his concern for his patients, staff and fellow clinicians and acknowledged that most medical care is considered an, “essential service,” but followed that with the need for social distancing (currently six feet) though this fellow did apparently understand that that is often not possible in certain specialties, so he recommended the wearing of the flimsy masks already provided and to, “add a face shield to your mask,” if closer contact is needed.

However, even if this now-managing physician is new to his post (as of just a few months ago), that is no excuse for the cavalier attitude displayed in the response.  For example, he wrote, “Most dermatologic care, including minor surgeries, are not likely to cause aerosolization of virus, so N95 mask is not needed,” when, in fact, the reason for six foot distancing is BECAUSE studies by the National Academy of Science show that simple breathing at rest can transmit pathogens!

(Has this guy ever heard the term “fogging a mirror”?  If someone’s alive and breathing, even calmly, they CAN fog a mirror with exhaled aerosol particles and any pathogens attached thereto and do so within a varied number of inches, the space in which most dermatology is practiced.) 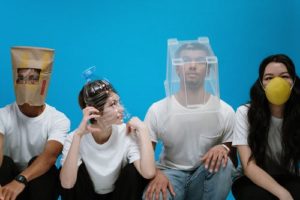 Well, in follow-up to the face shield suggestion, like the N95 masks, there are none of those in my husband’s department either, so it’s a good thing we still have the face shield we used while in private practice!

Since most good medical practice involves contact, often close contact, I find this advice appalling. The standard face masks DO NOT PROTECT THE TREATING CLINICIANS!  An N95 is what is recommended for proper protection of healthcare workers in close proximity to a patient during this pandemic period.

Not long after receiving that overdue response, another email landed in my husband’s inbox advising him of the contagion data of wearing one of the more flimsy surgical masks by sketched examples denoting risk percentages for contracting Covid-19, both with and without mask use.

I found this cartoon illustration a stark reminder of the risk he takes every time he enters the clinic, as the top cartoon box illustrates a Covid 19 carrier (over 50 percent of whom may be asymptomatic, according to a study by the University of Minnesota).  Such undetected patients who enter the building pose a 70% threat of infection to the clinician wearing a standard surgical mask while treating the patients in areas where they would need their mask off for that purpose. In my husband’s department, this situation is not uncommon, as he is often tasked with treating patients’ lesions which are located under masks which must be removed for treatment while both the clinician and the assistant are wearing only simple surgical masks that appear to be — according to the diagram he was emailed by his employers — ONLY 30 PERCENT EFFECTIVE IF THE PATIENT IS NOT ALSO WEARING A MASK!

Many on the frontlines, the doctors and nurses we see every day on TV, are wearing not only an N95 mask for self protection, but an overlaid standard surgical mask which would catch any particles the clinician exhales to protect the patient or whomever they’re speaking with. That application has also been used to keep the N95s clean as they are, as pretty much everyone knows, in very short supply.

All that being true, apparently this gentleman who finally responded to my husband’s requests hasn’t had occasion to review the medical journals nor watch the news and see the anguished first responders, healthcare workers, highly exposed bus drivers, and grocery and pharmacy workers who are grieving the loss of a co-worker, even as they continue to carry out their daily duties with PPE often inadequate for their level of contact. Otherwise, he wouldn’t have written, as we’ve said already, “Most dermatologic care, including minor surgery, is not likely to cause aerosolization of virus, so N95 mask is not necessary.”

This is not true, especially with a tense or heavily breathing patient.

As if to add insult to injury, the good doctor threw in the phrase that’s oft repeated to every preschooler through nursing home resident: “Wash your hands,” to which I could only add, “Well…..duh…..what a redundant comment to a fellow physician!”

It strikes me that as a country which should have known better, we have been sorely unprepared for this pandemic, even though it’s been predicted for several years. A special White House/NSC Task Force was set up and a manual put in place back in 2014, with measures to be taken to mitigate the drastic effects we’ve already experienced, but nobody in the current administration read it.  Instead, they threw it out spring of 2018 and turned the Covid PPE management over to Jared Kushner, who is not an expert in that, or probably any other governmental area.

That said, some blame also lies in the practice of “just in time” (JIT) supply chains, as the manufacture of many items formerly produced in the U.S has largely been outsourced to China by major companies such as 3M and Kimberly Clark, among others, leaving this country ill-prepared to tool up and take care of its own needs.

With the Wuhan outbreak, the Chinese needed those masks and the supply chain broke. Maybe we should conclude that JIT supply chains, when involved on a global basis and with respect to certain types of businesses and service providers, are not the ideal model for medical preparedness. This is likely why states stockpile and why there is also a National Stockpile, but even that is not enough, especially when one ignores the predictions and warnings of those who worked in advance to mitigate crises such as this Covid-19 pandemic.

And speaking of the National Stockpile, Jared Kushner, who seems to be today’s Boy Wonder to Trump’s Joker, couldn’t adequately explain what was going on with America’s stockpile of PPE supplies, as he claimed they were, “the property of the federal government, not the states,” after which he got busy altering the language used in defining the purpose of the National Stockpile from its original intent (check the hyperlink under Jared for more information).

So given all the above circumstances, I’m encouraging my husband to finally hang it up and retire — it’s not worth it. I don’t want to be a widow. And given my health is already compromised, he doesn’t want to bring the virus home to become a widower, so unless this place where he works can’t get its act together, that’s my recommendation to him, especially as so many varied businesses are prematurely opening up, which will only increase the presence of this very deadly virus.

Wear your masks folks, distance at least six feet, limit groups to no more than your household, or if distancing, perhaps 6-10 people, preferably outside, and be safe!