The man shot to death by Stanislaus Sheriff’s deputies in late September was once a star high school athlete, a doting father and a solid wage earner who was brought down by drugs, says the woman who was his girlfriend for about a dozen years.

Are these just the nice things we say about everyone once they die, even if not true? How would she know these things? Well, she says:

Another behavioral change the former girlfriend noted was an irrational fear he had developed. It caused him to carry the hatchet he had with him September 27 during a standoff with deputies behind a document shredding business at 820 Business Park Drive in the Beard Industrial Tract. 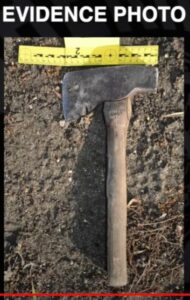 She recognized the hatchet because she watched the body camera video posted by the sheriff’s office. Her reaction: “That (the shooting) shouldn’t have happened.” The homeless often carry weapons such as this hatchet for self defense.

We agreed not to identify the woman who has cooperated with us. That seems fair since the sheriff’s office is withholding some basic facts, even in the face of a formal California Public Records Act Request.

We also presented written questions. We wanted to know how many deputies were present at the time of the shooting; how many shots were fired, how two deputies sustained minor injuries, and whether the alarm which brought deputies to that location was a false alarm.

We were able to answer that last question by talking to employees of Pacific Shredding and Sonitrol, none of whom were authorized to speak to reporters.

Sonitrol, whose stickers warned of audio and video surveillance of the building, had a proprietary system in place. Instead of sensing motion, the sensors picked up sounds which might indicate a break-in. Then, Sonitrol employees at monitors would check the cameras to determine if some improper activity could be verified.

That Sunday morning, just a tick before 5 o’clock, a pounding noise was heard but nothing untoward could be seen on the monitors. Nevertheless, deputies were notified. Ultimately, well after the death of Mr. Gonzalez, it was determined that there had been no break-in. No one has determined the source of the noise.

Many other questions remain unanswered, including those we specifically asked and those which might be answered by the documents we sought.

Some of those documents are clearly public records but the Sheriff, through Assistant County Counsel Rob Taro, is claiming an exemption, which allows for delayed disclosure. Mr. Taro says the requested documents will not be released until late March of next year, or later depending on the outcomes of two investigations.

The Sheriff’s Office is conducting one investigation through its internal affairs division. This administrative action will deal only with any discipline of any of the deputies involved.

The second investigation is underway at the Stanislaus County District Attorney’s Office, whose focus is on whether criminal charges might flow from the killing of Mr. Gonzalez.

After this recap of what happened that morning, we will talk about future articles.

Sunday, September 27, 2020, 5 am, two deputies arrive and start a “walk around” of the building looking for signs of a break in. As they come around the building’s southeast corner they hear a voice hailing them from behind waist high bushes. They order Mr. Gonzalez to raise his hands, which he does. Then they order him to come out from behind the bushes, which he doesn’t. 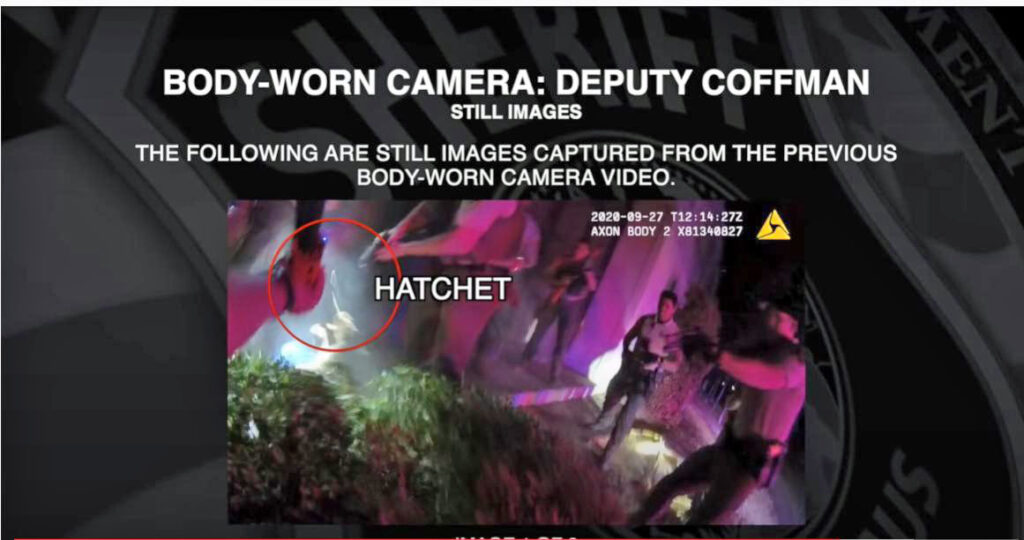 He is told other deputies are on the way, including one who has a dog. He is asked what can be done to make him comply with the order to come out and lay on the ground. Apparently, there is nothing.

The other deputies arrive, maybe as many as eight or nine. One is a dog handler and he tells Mr. Gonzalez the dog is going to bite him if he doesn’t cooperate fully. By this time Mr. Gonzalez is sitting down, using one hand to hold his cap to shield his eyes from the glare of the deputies’ flashlights, the other hand is still raised, still empty.

Then a Taser strikes him, the dog clamps on and for the first time the hatchet comes out. Shouting at Mr. Gonzalez not to hurt the dog, the handler draws and fires several times before holstering his handgun and pulling the dog away.

Okay, in future stories: we will look closely at how the conduct of the deputies is to be measured in each investigation. There are distinct questions:

Steve Ringhoff is a freelance journalist. Read more of his work here.