You follow her inside and the dark spaces become a shroud that makes it harder to see. You have to squint and it’s important now to see and see well, but it’s hard. The floor yields the way living things do, like fungus or moss. So does the hand rail, and your hand jerks away, as though it’s encountered danger; it’s instinctive.

Upstairs, in the trashed hallway, food manifests as smears, smears everywhere. Some of it isn’t food, not precisely food, it’s been processed. There’s a blind man in a wheelchair, two women in attendance. He rejects counsel and offers of help loudly. He will not be moved, not from the entrance to his room, not by tender reason nor by pleas for his own safety. His powerful upper body is going to seed. How does he get down the stairs?

Trash everywhere. A woman steps into the hallway and her swollen ankles are circumscribed by large red bands of coruscated skin. She’s distracted by her mumbling adult son and his pale friend. They need something she doesn’t have. The attorney’s talk is of rights and rat mites.

Everyone speaks of rats. Rats that bite and chase the dogs. Greasy rats and big rats and rats that come out at night and cover kitchen counters and climb into the cupboards.

Inside the rooms—oh, the rooms— some of the floors are wet and there are wet turds. In the darker places, bedbugs and ticks skitter and swirl wherever there’s room on the bare floors. Some climb the walls. The cockroaches are casual. Dogs bark everywhere. There are no cats.

In one room sits an old man on a bed, holding a cane. There are no chairs. The room is clean, the floor linoleum. He has a large television and three small dogs. “I mop every day,” he says, then shows where the holes are in the bathroom and in the walls behind the cupboards. “Las cucarachas come and they bite me,” he says, pushing up his sleeves.

Downstairs, you walk into a room where every step involves precision and care. In the bathroom, bright light cascades from the collapsed ceiling, like a hot shaft from the Inferno’s Fourth Circle. You want to back out fast, but you’re afraid to put a foot anywhere you can’t see and you don’t want to turn your back to anything. The preferred position would be with your back against the wall so you could see in all directions, but you don’t want to touch anything, not even with your back; not even with the soles of your shoes.

Dogs perch atop piles of blankets and clothing where human forms are inferred from an arm or a leg protruding. Everything startles the eye.

The building inspector for the attorneys says it was worse during the crack epidemic in Oakland, when squatters invaded abandoned houses and were together with the rats on the piles of garbage, but this is bad enough; more than bad enough. No one would want to see worse than this.

There’s a bug on the counter, not a cockroach. It’s ugly and tawny brown, and has large wings, not something you want on you. Why are most of the flies outside?

The young attorney comes stock still and stares at something on the floor. It could be matted hair, hairy excrement, or a something new to science.

“What IS that,” she says, transfixed. You want out. 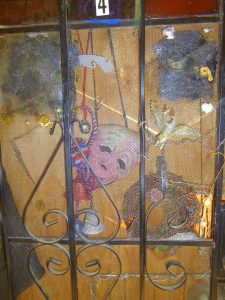 They have shaved heads and ugly tattoos; they’re muscular and compact and quick. One appears to have sharpened his teeth to points. They take quick inventories of everything and everyone. If they find someone old or infirm who has cigarettes they become friendly and confiding and hang around for a convivial smoke or two, exercising an age-old rule of extortion. Their eyes narrow and they alert at the slimmest opportunity to take and go.

So many wheelchairs. Some are folded into stacks and some with extra wheels piled on the chair cushion.

There are women too old to be in tight shorts that look like panties; they wear flimsy blouses that fall around their shoulders. They walk stiffly on skinny legs and seem ready to fall.