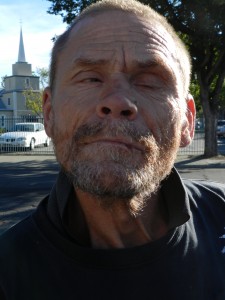 Back in September when we interviewed him, Scottie Shovelski at least had a roof over his head. Things changed for the worse two weeks ago.

Severely disabled, Scottie has said he blames himself for his, “failure to make progress.” For the last couple of years, he’s spent his nights at a local shelter. During the day, he’s had to fend for himself on the streets.

Recently, he lost control of his bowels. None of our local shelters has staff or services to handle Scottie’s situation, so he’s now on the streets both day and night.

When someone saw him drinking from a pint bottle of whiskey recently, Scottie said, “Some people realize how bad it is and are willing to give you the last two swallows sometimes.” Ordinarily, Scottie prefers coffee, cinnamon rolls, and cheap cigars.

He gets a small disability check, and vacillates about how to use it. When asked whether he’d like to have a place to live he might say, “I don’t want to go to some crappy place.” Five minutes later he will nod and say, “I would really like to go inside.”

A few days ago he said he’d like to go to Gilroy, where he thinks he has family. “Maybe I can go there and recover mentally,” he said. In fact, he’s not even sure where his family members live. He’s also lost track of how old he is.

Scottie walks with great difficulty and can hardly see; one eye is ruined entirely, and vision is poor in the other. His knuckles and fingers are scraped and torn from hitting the ground when he falls. While his physical disabilities are very apparent, it’s hard to tell the damage to his mind. He can speak with great insight one minute and drift away from a topic the next.

Scottie has a county case worker, but assistance is impeded by bizarre stipulations about the physically and mentally ill. “We offered to take him in just last month,” says a county employee, “but he wouldn’t go. People sometimes choose to spend their incomes on things besides food and shelter, and that’s their right.”

The mentally ill were bestowed with broad discretionary power over their own health during the theoretical shift about mental illness that occurred in the late seventies and early eighties, when a broad consensus among experts decreed that they no longer need be institutionalized. Today, those decisions result in mentally disabled people having the final say over whether or not they receive help. Such a situation is bad enough when applied to someone like Scottie Shovelski, who has good reasons to fear strangers. It’s even worse for schizophrenics.

Mary Baca believes a man named John Cassares has put implants in her ears and eyes. She claims he takes things from her pockets via remote control. Despite these clear indications of schizophrenia, Mary must agree to offers of help from county personnel who are strangers to her before she can be treated. She has been homeless for over two months and her mental illness is getting worse.

The mental and physical declines for both Mary and Scottie since the last time we interviewed them are obvious. Despite their need for help, help is unlikely because county personnel are faced with too many people in need, too few places to put them, and too little time to develop trust.

Scottie and Mary are only two of many people who need shelter and care now, before they are harmed beyond hope. While most of us are praying for rain and snow, they face winter without shelter from the storm. Like many people on the streets, they are very likely to join the coming winter crowds in our emergency rooms, and just as likely to be back outside after too short a visit.