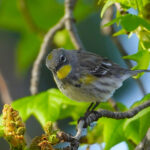 When Jim Gain started his “Learn 100 Valley Birds” series, we immediately thought of one our earliest posts, “How to Really Learn the Birds.” We thought a few changes might make it more relevant to Jim’s exciting project. “How to Really Learn the Birds (Updated)” doesn’t contain anything new; rather, we’ve shifted the focus just a bit toward Jim’s excellent series, making it even more local. ed. The therapeutic benefits […] 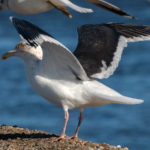 Few experiences in birding match the thrill of finding a “first” record, which involves not just seeing a bird for its first occurrence in a given place, but documenting (recording) its presence. His impressive skill at photography has enabled Jim Gain to document many of our rarest visitors, including the ultra-rare gull he found a few days ago. More of Jim’s birding adventures and superb photos are at his website, […] 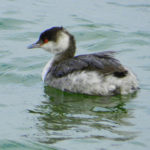 Oftentimes when they encounter grebes in the San Joaquin Valley birders are presented with an identification problem. In all, six species of grebe can be found, depending on the time of the year. Year-round residents include Clark’s and Western Grebes and the diminutive Pied-billed Grebe. Of the three, the Pied-billed Grebe is by far the easiest to identify. In addition to its small size, the bi-colored black and white bill […]

Local birders ran for their cars when Central Valley birding legend David Yee reported an Iceland Gull in northwest Stanislaus County Saturday. It took Modesto residents Jim Gain and Sal Salerno just over thirty minutes to rush to the bird’s location. Oakdale’s John Harris wasn’t too far behind them. All three were treated to excellent looks at a bright white, medium-sized sea gull that had many of the characteristics […]