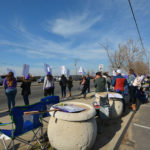 After a late afternoon meeting, Stanislaus County Supervisors and representatives of the Service Employees International Union 521 (SEIU) reached a tentative agreement on Wednesday. Both sides appeared to give a little as the SEIU negotiating team accepted the county’s offer of a 3% raise on condition of retroactive pay. The union had asked for 5% and the county had rejected both the 5% terms and retroactive pay. Dozens of workers […] 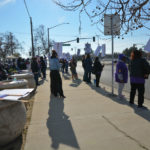 Dozens of striking county workers attended the Stanislaus County Supervisors’ meeting on January 8 and spokespeople implored the supervisors to reach an agreement. To their credit, Stanislaus County Supervisors went back to the bargaining table directly after the meeting—though as of Tuesday night there was still no agreement. Most of the workers on strike are in social services and behavioral health, including child and senior support, disability, and mental health. […]