The midterm wave of Democratic wins in traditionally Republican California districts brought on a spate of conspiracy theories, none wackier than the one put forward by California District 1o (CA-10) loser Ted Howze. But it turns out District 10 was indeed illustrative of several factors that could well determine the future of the Democratic Party, not just in California, but across the nation.

The Primary race began with a crowded slate of candidates, including TJ Cox, Josh Harder, Virginia Madueno and Sue Zwahlen. Even before Michael Eggman jumped in, these four Democrats promised credible challenges for incumbent Jeff Denham. And in an improbable but fitting ending, two of the four challengers ousted incumbent Republicans in dramatic, come-from-behind fashion.

After saying he wasn’t running early on in 2017, Eggman entered the race in late January. The move appeared to have been engineered by the Democratic Congressional Campaign Committee (DCCC) after a poll showed Eggman with a twenty point advantage over all the other candidates.

According to several insiders, the DCCC then brokered a deal whereby early CA-10 favorite TJ Cox would run against David Valadao in CA-21, where Democrats felt they had a chance to win with a strong enough candidate. Eggman’s entry rocked the remaining field of candidates, however, especially the campaigns of Josh Harder and Virginia Madueno.

Eggman himself had urged Madueno to run when he decided not to campaign again after two previous losses to Jeff Denham. Harder had been considered with Cox an early favorite, based primarily on his impressive fund-raising. But when Eggman declared, Harder not only lost favored status, he lost his campaign manager.

Harder had chosen Josh Lord to manage his campaign because of Lord’s previous experience managing Eggman. But when Eggman announced his run, Lord switched sides. Harder immediately found himself twenty points behind and missing a campaign manager.

“Eggman’s previous campaigns were worth five or ten million dollars in advertising and name recognition,” said Daniel Martin later. “Of course he came into the race with a big lead in the polls. It was our worst moment.”

Martin was Harder’s Director of Finance and along with Nicole Nabulsi took on much of the burden of managing the campaign through the remaining months until the June Primary. Only twenty-three years old, Martin was already a veteran of Tom O’Halloran’s winning campaign for Congress in Arizona. He had also served with O’Halloran in Washington D.C.

Nabulsi was only a few years older than Martin, but she too had already had campaign experience. Along with Josh Harder himself, Nabulsi and Martin are representative of a new generation of Democrats who will very likely influence the nation’s politics for years to come.

Less interested in ideology and dogma than they are in results, these new Democrats are rediscovering the power of the grassroots in American politics. There’s nothing new or revolutionary about their beliefs and issues—what’s new is their willingness to hew to traditional Democratic values. 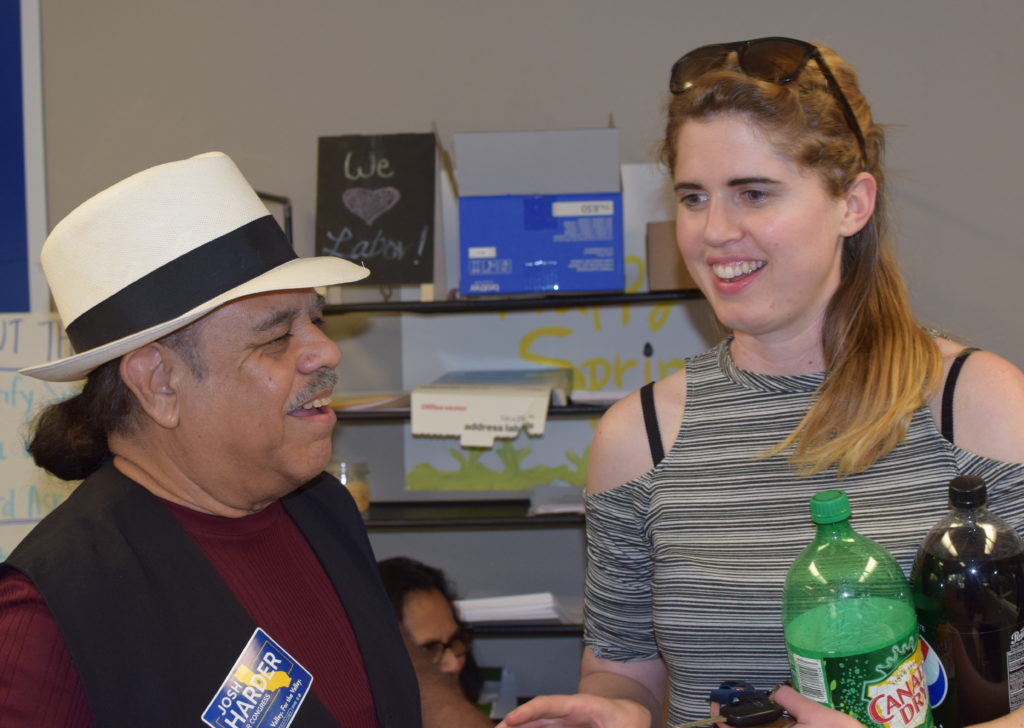 Rather than cave to the notion that successful campaigns need to lean right, this new generation of Democrats has found life and vitality in traditional Democratic issues, including living wages, affordable housing, education, and universal health care. They’ve also benefitted from new coalitions that formed as the Republican Party became the Party of Trump.

In California’s District 10, there were too many powerful women to count. All of them brought intelligence, energy, courage and a laser focus on winning. Patty Hughes, Jessica Self, Denice Hunt, Hunter Ross, Lise Talbott, Julissa Ruiz Ramirez, Victoria Stewart, Suzanne Autry, Gloria Vallin, Karen Warner, Lisa Battista, Selam Gebregziaber, Pearl Alice Marsh, and scores of other women realized the ascendance of Trump threatened decades of progress toward equal rights. They refused to let Trump and his revanchist allies recover the lost ground of male chauvinism and unequal rights.

Democrats are known for their squabbles and divisiveness, but California’s Congressional races featured a new unity. Once Josh Harder was declared a winner in District 10, the other candidates united behind him.

Zwahlen also joined with former Modesto Mayor Garrad Marsh and his wife Dallas in putting on a well-attended fundraiser at the Marsh home in Modesto. The fundraiser brought together local Democrats who hadn’t seen one another in years.

People who dropped by Harder’s offices came to expect being asked to help out and the response was overwhelmingly positive. Nicole Nabulsi was especially adept at network building and discovering talent. The result was a growing team of volunteers who did everything from help clean up the offices to bring Harder staff members home-cooked meals. It was in this way that the Democratic Party in CA-10 became a movement and the movement became a community.

Democrats usually lag far behind Republicans in campaign contributions. But Democratic candidates in general, and especially those campaigning in the San Joaquin Valley, raised far more money than usual in 2018. They also had far more volunteers canvassing on the streets, making phone calls, and writing letters to editors.

Part of the motivation to work harder came from the candidates and their teams. People who saw Josh Harder, TJ Cox and Andrew Janz willing to put body and soul on the line for Democratic values were inspired to do the same. People who saw Harder’s team of dedicated workers like Claris Chang and Ved Dashputre maintain focus and supreme effort day after day of a grueling campaign were inspired to join the effort.

Getting Out the Vote

It has been a truism for decades that Democrats win when voters turn out. But in the San Joaquin Valley, turnout doesn’t necessarily travel down the ballot. In 2016, Hillary Clinton won CA-10 but Michael Eggman lost to Jeff Denham for the second time. In CA-21, Clinton won by almost sixteen points, but Republican David Valadao defeated Emilio Huerta by over 13 points.

Even though 2018 was a mid-term election, Democrats came out in record numbers. Republican conspiracy theorists saw come-from-behind victories by Democrats as statistically impossible, but they failed to account for a tremendous grassroots effort to get out the vote. On the weekend before Election Day, the Harder team had almost a thousand people canvassing the district to get out the vote—they stayed on the streets until the polls closed on Election Day.

The hard work paid off. CA-10 turnout hit record numbers and the increase over previous years was among the best nationwide.

Valley Democrats should be encouraged by Josh Harder’s win in CA-10 and TJ Cox’s upset of David Valadao in CA-21. But even an unprecedented Blue Wave wasn’t enough to bring about down ballot sweeps for Democrats—too many local offices are still occupied by Trumplicans.

And instead of touting conspiracy theories, realistic California Republicans like Kristen Olsen are facing facts about the increasing irrelevance of the Party of Trump. This doesn’t mean Republicans have no future. The Republican Party has always been brilliant at rebranding, and the process has already begun with some.

Look for up and coming Republican candidates to try to separate themselves from Trump and his vocal supporters. The “new and true” Republicans will claim to be moderate and middle of the road, benefitting from comparisons with the likes of Donald Trump, Ted Howze and Ted Cruz.

But if the triumph of Trump has shown us anything, it has shown us the Republican Party depends on toxic elements of racism, xenophobia, misogyny, and economic sleight-of-hand. No one should be fooled by attempts at rebranding, not after Donald Trump has received virtually unanimous support from both houses of congress.

Valley Democrats and Democrats nationwide need to keep building coalitions and communities based on the same traditional values that propelled Josh Harder and TJ Cox to upset wins.  When the middle class and working Americans know they have representatives who will work in their best interest, they come out to vote. Valley candidates and their supporters need to keep pushing the issues that matter. If they do, they’ll keep winning both up and down the ballot.