Dr. Vance Kennedy is an award-winning scientist who had a distinguished career at the U.S. Geological Survey. Though long-retired, he follows current water issues closely and has become very concerned that the rush to conserve water via drip irrigation ignores the recharge benefits of flood irrigation, especially in those areas with highly permeable soil of the kind typical near Modesto.  Here, he takes exception to a recent article in the […] 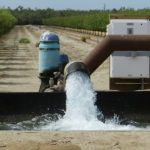 The Modesto Irrigation District (MID) is contemplating rate increases for water and electricity customers. The proposal has raised ire about below market water rates for local farmers. City dwellers argue that they should not have to pay higher rates as long as farmers receive water at subsidized rates. Any time a government entity provides a subsidy, three possible reasons explain it. First, the subsidy may exist to promote an activity […]